Compare prices on car hire in Zaragoza from all the major brands and find the best deals. When you book through us, unlimited mileage and insurance are always included in the price given. 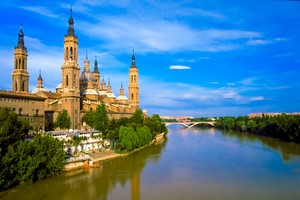 Zaragoza is the capital of the province of Zaragoza which belongs to the region Aragon in northeastern Spain .The city is situated on the banks of the River Ebro is Spain’s longest river with its entire length within national borders, as well as tributaries Huerva and Gállego. It is a little over 300 km to the capital Madrid in the southwest.The Celts founded the city before it fell into the hands of the Roman Empire, and in 2010 was the population of approx. 700 000.

There are many ancient sites to see in Zaragoza, including parts of the Moorish city walls from the time before the 1000-century and the beautiful Cathedral of San Salvador, consisting of parts from the 1100s. The city offers museums such as the historical museum Museo de Zaragoza, Museo Pila Rista dealing with religious art and the art museum is devoted to the artist Pablo Serrano. It organized several festivals during the year and the largest is the traditional festival Fiesta del Pilar, to be held in October.

Zaragoza Airport is located about 15 km outside the city.