Compare prices on car hire in Bern from all the major brands and find the best deals. When you book through us, unlimited mileage and insurance are always included in the price given. 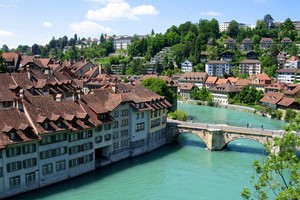 Bern, which is fairly middle of Switzerland , is both the nation and the Canton of Bern’s capital.The city has a population of approx. 127,000 – making it Switzerland’s fourth largest. The dominant language of Bern is German.

Most of the attractions located in the old town – which in its entirety is included on UNESCO’s World Heritage List. In addition to a well-preserved buildings with roots in medieval times, there are a number of historic wells with 1500-numbers scenes. Among the most famous buildings in the city, we find three towers in the 1200s had a city gate features: Zytglogge, Käfigturm and Holländerturm.

Otherwise, considered the old city council building Erlachenhof as the city’s most imposing buildings. It was built in 1747. Also, the gothic medieval church Berner Münster and the bridge Untertorbrücke – both from 1400 – are among Bern’s main architectural attractions.

Bern is in all respects an art and culture – and the many cultural institutions are proof. One of the most popular is the Stadt Theater Bern, which included both plays, opera and ballet.

Families will also prioritize like a trip to the zoo Tierpark Dählhölzi, where such For a famous “bear pit” (with live bears) – which represents a tradition in the city that dates back to the year 1411.