Compare prices on car hire in Frauenfeld from all the major brands and find the best deals. When you book through us, unlimited mileage and insurance are always included in the price given. 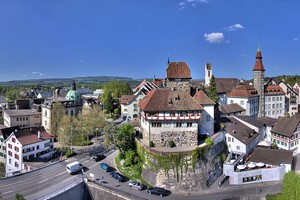 Frauenfeld (22,000 inhabitants) is the capital of the canton of Thurgau, situated in northern Switzerland , ca. 43 km southwest of Zurich .Majority language in the city are German.

Frauenfeld is a city that has focused much on the creative meeting places FOR arts and cultural activities. Kulturzentrum Eisenwerk holds, for example, in an abandoned iron works – and today contains space for theater, concerts and visual art.

A little outside town is the former convent Kartause itting, who both serve as training center and houses the Thurgau Art Museum. In the complex there is also a popular restaurant.

Otherwise, Frauenfeld especially known for the international rock and hip-hop festival-OpenAir Frauenfeld, who has been held here every year since 1985. Attracting many world famous artists to perform, and every year there are around 100,000 people visiting the festival.