Compare prices on car hire in Fribourg from all the major brands and find the best deals. When you book through us, unlimited mileage and insurance are always included in the price given. 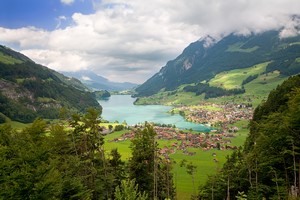 Fribourg (German: Freiburg im Üechtland) is located in the western part of Switzerland – midway between Geneva and Zurich .The city, which is bilingual (French and German), is the capital of the canton of the same name. Fribourg was grunnagt in 1157 – and currently has approx. 34,000 inhabitants.

The main attraction of Fribourg’s old town, which, like the Altstadt in the capital, Bern, has preserved its medieval character within an intact city wall.  Many of the buildings from the 1500s. Some are older, including Cathedral of St. Nicolas, which was begun in 1238

Otherwise, the old Town Hall in red sandstone named among the architectural sights. The old town has an idyllic location on a peninsula in the river Sarin.