Compare prices on car hire in Geneva from all the major brands and find the best deals. When you book through us, unlimited mileage and insurance are always included in the price given. 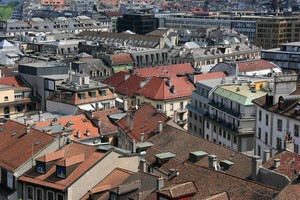 Geneva is located in the southwest, French-speaking part of Switzerland – and with its 187,697 inhabitants (2009) the country’s second largest city.It is the capital of the canton of the same name – and its location on both sides of Lake Geneva (Lac Leman) is very idyllic.

The city was founded back in Roman times – and have historically been both a part of the German-Roman empire, a republic, part of France – and since the fall of Napoleon in the early 1800s, a central city in Switzerland.

Geneva has since 1864 been the seat of the International Red Cross, and currently has several international organizations, their main offices here – including UN (European Office) and WHO (World Health Organization).

One of the main attractions is the giant fountain Jet d’Eau in Lake Geneva, with its 100 meter high water jet. Otherwise, many points of interest collected in the “Old Town” (La Vieille Ville). Here you will find such Cathedral of Saint-Pierre (begun in 1160) and the famous Musée d’Art et d’Histoire. Other popular destinations can be the great parks of the Jardin Botanique de Genève and Le Bois-de-la-Bate mentioned – which also includes their Zoo.

The nearest airport is the Aéroport International de Genève , ca. 4 km northwest of the city.