Compare prices on car hire in Lucerne from all the major brands and find the best deals. When you book through us, unlimited mileage and insurance are always included in the price given. 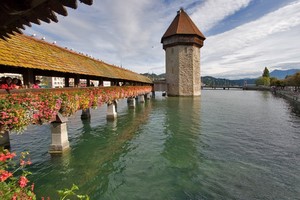 Lucerne, the capital of the canton of the same name, located in Switzerland – at Vierwaldstättersjøen (Lucerne).The town has 57,890 inhabitants, mostly German-speaking. From the city has views of the famous mountains Rigi and Pilatus. The latter, where the top is 2,132 m above sea level, are connected by a gear-cutting (the world’s steepest).

Lucerne is one of the most popular tourist cities in Switzerland and has many attractions to showcase. One of these is the Chapel (Chapel Bridge) from 1333 Right beside it, we find Wasserturm – a 34 m high water tower from around 1300, which is one of Switzerland’s most photographed landmarks.

Museggmauer, which consists of three towers that were originally part of the old city walls from the 1300s, is also a popular attraction. In one of the towers (Zytturm) to the city’s oldest watch (from 1535).   Otherwise the Altstadt (“Old Town”) in itself an attraction – with a number of well preserved historic buildings. In one of the parks, we find a peculiar monument, carved into a rock wall – a 6 m long lion relief (Löwendenkmal) of the Danish sculptor Bertel Torvaldsen.

Of the modern buildings have KKL (Culture und Kongresszenter Luzern) is mentioned. Here you will find a concert hall with room for 1,800 people, which is considered to be one of the best.

The nearest airport is Flughafen Zurich , 52 km northeast of Lucerne.