Compare prices on car hire in Bangkok from all the major brands and find the best deals. When you book through us, unlimited mileage and insurance are always included in the price given. 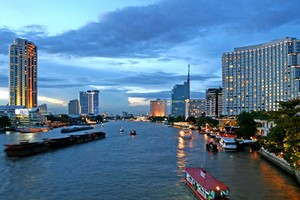 Bangkok belongs to the province of the same name located to the south of Thailand .Through the city flows the Chao Phraya River which runs into the Gulf of Thailand about 40 km further south. Bangkok is the largest city in the country and has been the capital since 1782. The population is somewhat uncertain because it is probably present a large number of anonymous job here, but in 2010 the figure was estimated at approx. 9 100 000.

Cityscape of Bangkok is characterized by beautiful oriental palaces, temples and mansions as well as the famous canals many of which were filled again in the 1950s. It held more liquid markets in the morning in the small canals that still exist. One of the most beautiful palaces and the most famous attractions is the Grand Palace which was built in 1782. Temple of Emerald Buddha is considered to be the most important temple of the country and located in the historic district.

Bangkok Airport, Suvarnabhumi Airport opened in 2006 and is one of the busiest airports in Asia.The airport is located approx. 25 km east of Bangkok.