Compare prices on car hire in Chiang Mai from all the major brands and find the best deals. When you book through us, unlimited mileage and insurance are always included in the price given. 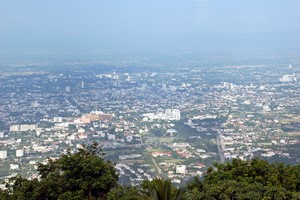 Chiang Mai is the capital of the province of Chiang Mai and is located far north of Thailand .The border to Myanmar is about. 200 km north of Chiang Mai, the city is built on both sides of the River Ping, which is a tributary of the Chao Phraya River. This is the largest city in the northern part of Thailand with a population of almost 150 000 (2008). Chiang Mai was founded in 1296 and was an important trading port in the Middle Ages.

The old city walls can still be seen in Chiang Mai, and there are many historic temples here. Wat Chiang Man is the oldest temple in the city and was built in the 1200s, and Wat Phrathat Doi Suthep from the 1300s is one of the most popular shrine in Thailand. In Maes Elephant Camp outside of town one can see elephants playing football and painting. Dokmai Garden is a lovely botanical garden and zoo Hiangmai Zoo holds over 7000 animals.

Chiang Mai International Airport is located about 60 km east of the city.