Compare prices on car hire in Hat Yai from all the major brands and find the best deals. When you book through us, unlimited mileage and insurance are always included in the price given. 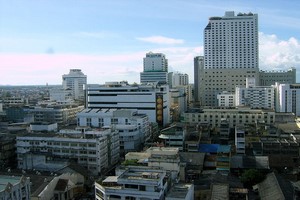 Hat Yai is centrally located directly south of Malayahalvøya in Thailand .The largest town in the province of Songkhla with a population of nearly 160,000 in the city (2008), which also makes the Hat Yai to the country’s fourth largest city. If you include the metropolitan area the figure rises to around 800 000 It is approx. 20 km to the city of Songkhla in the south and about 80 km to Malaysia in the south.

Hat Yai Municipal Park is a beautiful park located approx. 6 km outside the city center. There is a pavilion that stands out in a pond, and statues of King Rama V and the Chinese goddess Guan Yin. Wat Hat Yai Nai is a huge statue of Buddha at 35 meters and on the inside of this one can find a museum and a souvenir shop. Hat Yai offers many shopping areas such as markets and shopping centers.

Hat Yai International Airport is located about 9 km outside the city and is an important airport for pilgrims going to Mecca.