Compare prices on car hire in Albuquerque from all the major brands and find the best deals. When you book through us, unlimited mileage and insurance are always included in the price given. 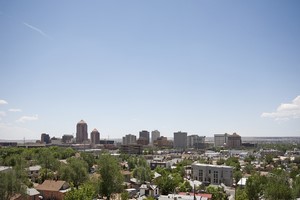 Albuquerque is located in southwestern United States and is the largest city in the state of New Mexico.The town is situated by the river Rio Grande, and has 522,000 inhabitants (2008). Albuquerque is one of the oldest cities in the U.S., and was founded in 1706 by the Spaniards.

The city has a unique multicultural heritage and history, and in the center are several museums that tell about this. Albuquerque also has great shopping, vibrant nightlife, art galleries, parks and gardens.

One of the most popular tourist attractions is the Albuquerque Biological Park – which includes a botanical garden, a zoo, an aquarium and a lake with good fishing and rental of pedal boats.

Museum of Natural History and Science is also a popular attraction for tourists, with educational exhibits of such dinosaur-skeleton. There is also a planetarium and an IMAX cinema.

Albuquerque has several annual festivals. The most famous is the hot air balloon festival, which takes place in October, and is the largest of its kind. More than 700 balloons facilitates the same time, and the festival is well attended by both locals and tourists.