Compare prices on car hire in Austin from all the major brands and find the best deals. When you book through us, unlimited mileage and insurance are always included in the price given. 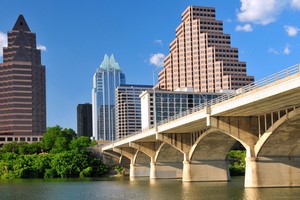 Austin is located just south of the central part of the United States and is the capital of the state of Texas.The city falls under the county Travis County, and has 758,000 inhabitants (2009). Metropolitan area has over 1 million inhabitants.

Austin was founded in 1835 and is located at the Colorado River. The city has a very famous university –   with approx.50,000 students. Austin is known for its vibrant nightlife with many spots, and with its countless concert venues.

Urban landscape is characterized by both low-rise buildings and skyscrapers, and The Austonian is the highest, with its 208 meters above the ground. The village has more shops and malls, restaurants, museums and art galleries. The city has several lakes, including Lady Bird Lake, Lake Austin and Lake Walter E. Long.

One of the oldest tourist attractions, Mount Bonnell (also known as Covert Park) – a height of 238 meters which is located northwest of downtown. After having climbed the 100 steps of stone, has a wonderful panoramic view over the city and Lake Austin. An observation platform is also on top.

Austin is also known for the annual and popular music festival “South By South West” – with famous artists and record industry people.