Compare prices on car hire in Baltimore from all the major brands and find the best deals. When you book through us, unlimited mileage and insurance are always included in the price given. 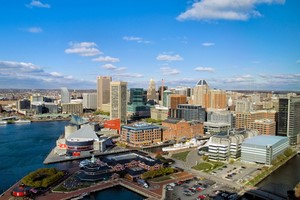 Baltimore is one of America’s most important port cities, and is located in the northeastern part of the country on the Atlantic coast. Baltimore is the largest city in the state of Maryland – with 640,000 inhabitants in the city center. Metropolitan area has about 2.7 million inhabitants.

Baltimore has many attractions and sights, and “Inner Harbour” in the center is the most visited area of ??the city. Here you will find “Harbour Place & The Gallery” – the city’s premier shopping destination with restaurants, nightlife and entertainment.

Other city sights include Baltimore Cathedral from the 1800s, Fort McHenry – the fortress in 1776, Baltimore Museum of Art – including works by Matisse, Picasso and Van Gogh, Maryland Science Center – a science center with interactive exhibits and planetarium, zoo Maryland Zoo and the city’s large aquarium with dolphin shows.

The observation deck “Top Of The World” is also one of the most attractive destinations. This is 27 floor of World Trade Center, and from here one has 360 degree panoramic city views.