Compare prices on car hire in Flagstaff from all the major brands and find the best deals. When you book through us, unlimited mileage and insurance are always included in the price given. 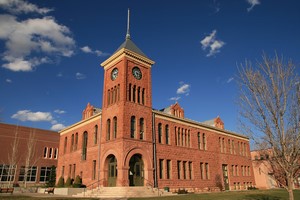 Flagstaff is located in southwestern United States , and is a city in the state of Arizona with 60,200 inhabitants (2008).The city is also headquarters for the county of Coconino County. Flagstaff is located 2,121 meters above sea level, and the highest mountain in the area is Humphreys Peak – located 17.7 km north of the city – and measures 3,852 meters above sea level

Tourists use Flagstaff often as a base when visiting the Grand Canyon, one of America’s biggest tourist attractions. Grand Canyon is 140 miles north of Flagstaff – approx. 2 hours of driving time, and Grand Canyon National Park is also listed as a UNESCO World Heritage Site.

Flagstaff is also known worldwide for its Lowell Observatory – where the astronomers discovered the planet Pluto in 1930. The observatory is open to the public.

Other sights in the city’s “Museum of Northern Arizona” – a popular natural history museum as well as “The Arboretum that Flagstaff” – a botanical garden with a beautiful collection of trees and shrubs.

Flagstaff is the largest city along Interstate 40 (which runs along the California and New Mexico), and is also part of the famous and historic stretch of “Route 66”.

The town has a small airport – Flagstaff Pulliam Airport – which is 6 miles south of downtown.

The largest airport in Arizona’s Phoenix Sky Harbor International Airport , located 238 km south of Flagstaff, outside the city of Phoenix.