Compare prices on car hire in Fresno from all the major brands and find the best deals. When you book through us, unlimited mileage and insurance are always included in the price given. 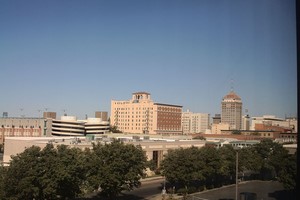 Fresno is a city in the state of California, the San Joaquin Valley. It has about 500,000 inhabitants (2009). The city is about. 300 km southeast of San Francisco , and is the county seat of Fresno County.

Fresno was founded in 1872, and 40% of the population is Spanish speaking. The city is known to have over 300 sunny days a year.

Some of the most popular tourist attractions in Fresno is “Fresno Metropolitan Museum of Art and Science” – an interesting science and art museum, “Fresno Art Museum” – a modern art museum that also shows films and hosts lectures and concerts, “Old Fresno Water Tower “- the city’s old water tower from 1894, and” African American Cultural and Historical Museum “- which tells visitors about the local African-American culture with its permanent and changing exhibitions.

Yosemite National Park (located in the Sierra Nevada mountain range) is located 97 km from Fresno, and is known for its granite cliffs, towering waterfalls, rivers and mammoth trees. The national park is a major tourist attraction and is listed as a UNESCO World Heritage Site.