Compare prices on car hire in Honolulu from all the major brands and find the best deals. When you book through us, unlimited mileage and insurance are always included in the price given. 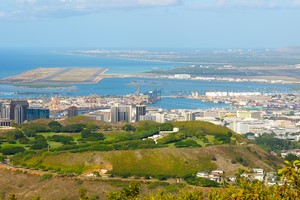 Honolulu is the capital and largest city in the U.S. state (and island) Hawaii – located in the Pacific. The city is located on the southeast coast of the island of Oahu, which   is one of the most populous islands in Hawaii.Honolulu has 376,000 inhabitants (2008), and is an important port city.

The city is also the center for art, history and culture – with several museums and art galleries. The only royal palace in the United States – Iolani Palace from 1871 – Located in Honolulu, and is open to the public.

One of the city’s landmarks is the Aloha Tower – a 56 meter high lighthouse in the Gothic style from 1926, standing at the harbor.

In Honolulu is the city’s Chinatown, which is a major tourist attraction with its colorful market places during the day and restaurants and nightlife venues in the evenings.