Compare prices on car hire in Louisville from all the major brands and find the best deals. When you book through us, unlimited mileage and insurance are always included in the price given. 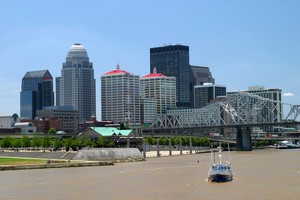 Louisville is the largest city in the state of Kentucky in the United States , and has 714,000 inhabitants (2008).The city is located in the county Jefferson County, the Ohio River – which forms the border with the state of Indiana.

Louisville was founded in 1778, and the city’s architecture is characterized by skyscrapers and tall buildings, but you will also find many Victorian buildings and houses in the historic district.

Other popular tourist attractions in Louisville include: Frazier International History Museum – a museum where you can relive historical events, Muhammad Ali Center – a museum and cultural center that celebrates the famous boxer and Louisville Science Center – a science museum with interactive exhibits and IMAX cinema.

The city also has many parks and a zoo.