Compare prices on car hire in Minneapolis from all the major brands and find the best deals. When you book through us, unlimited mileage and insurance are always included in the price given. 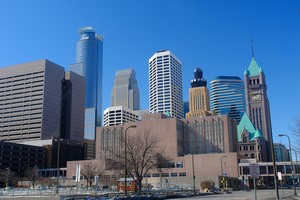 Minneapolis is the largest city in the state of Minnesota in the United States , and has 388,000 inhabitants (2008).The city is situated on the river Mississippi, and is a financial,   commercial, and industrial center.Minneapolis is also an important transport hub.

15 km east of Minneapolis, the state capital of St. Paul. The two cities have in recent years grown into one coherent metropolitan area, and is called “Twin Cities” – the Twin Cities. This metropolitan area has about 3.5 million inhabitants (2008).

Minneapolis is known for its many lakes, including Lake Minnetonka – which is a popular recreation area.

The city has several cultural tourist attractions, including Weisman Art Museum, a variety of art museums and an architectural landmark. The Walker Art Center is worth a visit, which also has a great outdoor sculpture park with 40 permanent works of art. Nearby is also the beautiful Basilica of Saint Mary – America’s first basilica from 1926.

Minneapolis has great shopping, and the “Mall of America” ??is the country’s largest shopping mall with over 500 shops and restaurants. The center also has an indoor amusement park.

Two major highways connecting Minneapolis with the rest of the country – Interstate 94 that runs east / west and Interstate 35 that runs north / south.