Compare prices on car hire in Sacramento from all the major brands and find the best deals. When you book through us, unlimited mileage and insurance are always included in the price given. 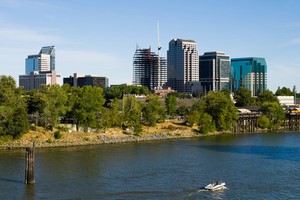 Sacramento is the capital of the U.S. state of California in the United States . The city is located in the Central Valley, and has a population of approx.460000 (2007) – but it is estimated the entire metropolitan area, the figure rises to around 1.4 million.

Sacramento was founded in 1848, after gold had been discovered in the area. Then the city was a long time the center of the so-called “gold rush” in California.

The most popular attraction is the Old Town Old Sacramento, where most streets are covered with cobblestones, and the 53 preserved historic buildings from the 1860s constitute a unified architectural environment. You can also loved the steam ferry on the Sacramento River.

Otherwise, a number of museums and cultural institutions in Sacramento. The most famous – and most visited – it is great Sacramento Convention Center, such as holds the Crocker Art Museum and a theater with 2,500 seats.