Compare prices on car hire in San Antonio from all the major brands and find the best deals. When you book through us, unlimited mileage and insurance are always included in the price given. 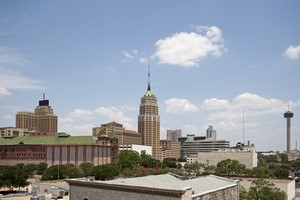 San Antonio is located in the southern part of the United States , and is – with its 1.3 million inhabitants – the second largest city in the state of Texas.It is often regarded as Texas’ cultural center.

The biggest attraction in San Antonio, The Riverwalk – a special time road system along the San Antonio River, where there are a number of popular bars, restaurants and shops. Along The River Walk can be found also many of the city’s other attractions – including The Arneson River Theatre, San Antonio Museum of Art and the 123 meter-high Tower Life Building. The city also has many other museums and cultural institutions.

Otherwise, the two major amusement parks mentioned. At Sea World San Antonio (which is part of the American chain of Sea World), one can eg experience the killer whale, dolphin and sea lion show – while Six Flags Fiesta (a division of the world’s largest amusement park chain) can try the move in the world’s highest roller coaster.