San Diego is one of the most beautiful cities California has to offer. With its serene beaches and warm temperature to match contrasting with the buzzing nightlife, your trip is one you and your family will treasure forever. But have you thought about how you’re going to get around? Consider car hire. With so many car rental options to suit your needs and budget, you’ll be zipping around the city living your best life before you know it. 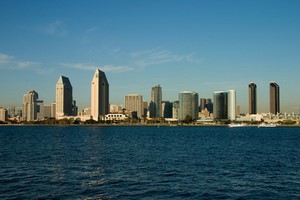 San Diego is California’s second-largest city with a population of almost 1.5 million. It has been called the “birthplace” of California and resides just 120 miles (190km) south of Los Angeles. It is home to beaches that go on for miles – perfect for relaxation. These beaches are complemented by the evergreen warm weather, meaning whenever you choose to visit, you’ll be feeling the warmth through and through. Make sure you also leave time to see the sights, especially the iconic district Gaslamp Quarters, known by many as the cultural capital of one of the world’s most exciting destinations.

San Diego is renowned for its vast array of tourist attractions. Families and couples are sure to enjoy a holiday of a lifetime if they visit San Diego. The world-famous San Diego Zoo is located in Balboa Park – an urban park located a mere 2.5 miles (20 minutes drive) from the Gaslamp area of the city. Get up close and personal with more than 650 different species in one of the world’s most renowned and respected zoos which has been welcoming excited tourists like yourself and your family for over a century.

Food is a huge part of San Diego’s culture. The culinary scene of San Diego owes a lot to Mexican traditions. Some of their most famous dishes include carne asada, Californian burritos and a whole range of seafood specialties. Try something new and explore the street market scene where unique aspects of San Diego’s culture are freshly cooked before your eyes every day. If wine is more your thing, then you’ve also come to the right place. Temecula is only a short distance from San Diego and prides itself as one of the wine capitals of the world.

If you’re a party animal, San Diego is definitely the place for you to visit. We recommend a trip to the Gaslamp Quarter. Its located about 4.1 miles – 12 min from Old Town. It is here that you can enjoy a fun and informative brewery tour, experience the sights and history of the Old Town and really live and breathe the crackling excitement you can only get when you immerse yourself in such a nightlife setting. The Gaslamp Quarter of San Diego has a huge amount of trendy bars and clubs for you to explore.

Explore With Your Rental Car

Getting a rental car when you’re on holiday in San Diego is unquestionably a worthy investment. Some of the best tourist attractions are best reached by car and of course, it removes the coordination of alien public transport systems when you can just jump in your car and go. If you’ve planned to take a trip to the world-famous San Diego Sea World, for example – or the historically charged USS Midway Museum, you’re going to want to spend the whole day there without being bound by confusing public transport timings.

San Diego Seaworld is a mere 15 minute drive from the Gaslamp Quarter. In your rental vehicle, it’s a short distance of 6.7 miles (10km) to reach the iconic attraction. Sea World is known and loved the world over, and with your hire car, you could be seeing dazzling dolphins, wonderous whales and learning about some of nature’s finest creatures at your own convenience. Be amazed, along with the many million other visitors Sea World has welcomed over its many years and see the sights you’ve only seen in pictures before. Make your dreams a reality at Seaworld.

Perhaps history is more your thing, and if so, you should definitely check out the USS Midway Museum. Many of the aircrafts housed here were built in Southern California and are a real testament to the legend of the San Diego Navy. Explore the legend and learn about Midway, the United States’ was the longest-serving aircraft carrier of the 20th century. Live the legend of San Diego’s history.

Don’t forget about the San Diego shopping scene. We recommend you visit the Westfield Horton Plaza, a multilevel mall, located less than 1 mile (10 mins) from the heart of the Gaslamp Quarter. The famous shopping mall has been helping customers shop til they drop since 1985 and boasts an incredible five floors for you to explore. You’re bound to find the perfect souvenir here and many more retail goodies besides. And of course, there are several coffee shops and restaurants so you can re-fuel during your Julia Roberts-style day! Don’t stop shopping!

San Diego Internation Airport is located 3 miles (15 min) North-West of San Diego. It is an international airport and its close proximity to the beating heart of San Diego makes it a popular commuting point. It has five main carriers and is a focus city for Alaska Airlines. While not a hub city when it comes to airports, it is popular as a focus city.

It should probably come as no surprise that San Diego International Airport is quite busy. Indeed, it is among the engaged single lane airports in the US and the third busiest in the entire world. This is all made possible by the fact that San Diego International Airport covers a massive 663 acres of land. In the last few years, it has claimed to have served 50,000 passengers per day. That’s a lot of air traffic! Some car rental companies you could consider here include Hertz, Budget and Sixt Car Rental.

While San Diego International airport provides mostly domestic flights, there are also options to fly internationally from here too. There are around 500 scheduled flights per day, and some of these go further than just the rest of the United States. International destinations are vast, with options to fly to Japan, England and Germany – amongst others – and in the very convenient style known as non stop.

Traffic in and around San Diego can vary greatly. Since there is a population of over 3 million people, that works out at around two miles of road per thousand people, which means that traffic can get crazy at certain times of the day. If you hit the rush hour traffic you could be waiting for, well, way more than an hour. Congestion is sky-high during these types of hours.

Parking is a bit unpredictable in San Diego, much the same as other populous cities in the United States. You could be driving around for half an hour looking for a space, or the driving gods could be on your side and you could get lucky. Nevertheless, we recommend you avoid areas such as Downtown San Diego and look to tourist-heavy areas such as Coronado Beach.

The traffic is so unpredictable in San Diego that putting real thought into whether you’d like to rent a car is really something you should do before arriving. If you are planning to venture further out and indulge in vineyards or apple picking, maybe a car is necessary. But if you’re planning on spending our days wandering around Downtown San Diego with only the odd day trip, perhaps putting up with public transport is the most sensible option. Don’t forget – many of the attractions are in fact walkable if you’ to.