Compare prices on car hire in San Francisco Airport from all the major brands and find the best deals. When you book through us, unlimited mileage and insurance are always included in the price given. 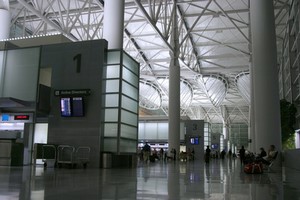 San Francisco International Airport (SFO) is located 21 km south of San Francisco in the United States . There are both bus and train service between the airport and San Francisco .There are as many as 17 different car rental company, located near the baggage belts in Terminal 1 and 2 Among the companies represented are Advantage, Alamo, Avis, Budget, Dollar, Enterprise, Fox renate A Car, Hertz, National and Thrifty. 37,405,467 visited San Francisco Airport in 2008 making it one of the 25 largest airports in the world. It is the headquarters for United Airlines and Virgin America. The airport has four terminals, one of which is for international destinations. From San Francisco, a journey to cities in Europe, Asia, Latin America and Canada . The range of bars, cafes, restaurants and shops are good at all terminals. Other amenities include wireless Internet, ATM, medical office, hair salon, showers, business and conference center and an aquarium. There are several hotels nearby the airport, including the Holiday Inn San Francisco International Airport North.