Thinking about traveling to Seattle but unsure of what you want to see or do when you get there? Perhaps you want to travel a little further, but don’t know how hard it is to hire a car? Don’t worry! We will take you through some of the top places to visit, how long it will take you to get there and, of course, where you can rent your car from. Check it all out below! 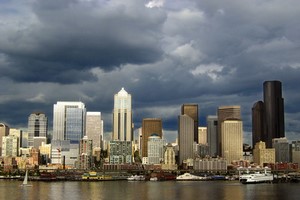 Seattle is the largest city in the state of Washington, USA. It is a thriving metropolis, with a population of around 750,000, and it’s home to some of the biggest names in technology, like Amazon and Microsoft. Perhaps its most famous landmark is the Space Needle, seen in the popular 90’s TV show, Frasier, and a prominent reminder that the city hosted the 1962 World Fair. Seattle is pretty mild all year, weather wise, although from November to April (Winter and Spring) it often rains a lot. This means that most people try to travel from late May into September.

As a state, Washington has many great places to visit aside from Seattle. Be careful though not to confuse Washington with Washington DC, since the latter is a few days away by car! Many of the nearby cities, such as Spokane, Bellevue and the state capital, Olympia, offer visitors a chance to take in some vibrant modern architecture juxtaposed against the mountains and lakes of the surrounding landscape. Just like Seattle itself, you will be spoilt for choice when it comes to finding things to do and unique sites to visit to create a memorable vacation.

Seattle is quite uniquely positioned as a city, sitting on the West coast of the USA and spilling onto the waterfront of Lake Washington. This provides visitors with a wealth of natural sites and landscapes that are difficult to find together elsewhere in the world. As the fourth largest port in the US, Seattle is a hive of activity and an important gateway for American trade with Asia. Being almost surrounded by water, it may not be surprising to know that the city has some of the best and freshest seafood in the country on offer too.

Speaking of food, with a variety of local specialities on offer you will be pleased to know that there are a number of food tours available. These let you experience a multitude of culinary delights in a day. Some tours take you along for a ride with local chefs as they choose their produce for the day, while others focus on the range of ethnic foods available in the city. If craft beer is more your thing, then you’ll be pleased to hear there are 250 craft breweries all based in the state, though please don’t drink and drive!

Naturally, if you are visiting Seattle you will most likely want to visit the Space Needle. It’s an absolutely iconic part of the city’s skyline. From Seattle-Tacoma International airport it’s 15 miles (24 km) away, about 35 minutes by car, and gives you access to some of the best views over Seattle when you visit the renovated observation deck. Of course, if you want to look at the Space Needle itself then we recommend heading over to Kerry Park instead. Up on Queen Anne hill is absolutely the best place to take photos of the Seattle skyline.

Pike Place is another one of Seattle’s must see locations. Typically about 30 minutes by car from the airport, being just over 13 miles (20 km) away, it is well known for having a beautiful array of flowers all year round. That’s as well as being a hub for live music and home to a plethora of vendors. Unsurprisingly with a name like Pike Place, it’s also a great location to buy fresh fish, though you should watch out for fish being thrown over your head if you make a purchase!

If you are lucky enough to be visiting when the weather is good, you can always take a drive over to Alki beach. It’s just a 14 minute drive from the city centre being 8 miles (12 km) away. Here you can enjoy a leisurely walk, or rent some bikes to go cycling. If you just want to sit back and take it easy, there is also a number of restaurants and cafes overlooking the water.

Less than a mile (1.6 km) away from the city centre, a quick 3 minute drive, is the Seattle Art Museum. The building is practically a work of art itself with its sweeping curved structure and tall windows, not to mention the murals painted on the outside. Inside you will find over 25,000 objects, ranging from sculptures and paintings to full installations. This collection represents the artistic endeavours of over 100 different cultures from across the globe. The museum often runs educational programmes too, giving something for the younger visitors to enjoy during your time there.

If you are travelling from outside of the US, you will most likely be landing in Seattle-Tacoma International airport. Luckily it isn’t too far from the city, which is roughly a 25 minute drive away depending on the traffic conditions. The airport itself is one of the busiest in the US, so you should be prepared for some long waits upon arrival if you travel during the peak seasons.

Renting a car is generally recommended if you want to easily travel around Seattle and the nearby areas. Luckily you have 14 different rental companies to choose from at the airport. Enterprise is going to be the most well known out of the rental choices, but all of the services are open for 24 hours a day and offer a shuttle bus to and from their rental depo outside of the airport.

Though no longer the primary airport for the city, Boeing Field International is still operational. With only 2 runways it’s a much smaller airport compared to Tacoma’s 3. While that might not sound like such a big difference, Boeing Field has less than a third of the air traffic. That said, if you want to avoid long queues this could be a better landing spot if you can find an airline that lands there. They also have some car rental companies: Modern Aviation, Hertz, Kenmore Aero Service, Signature Flight Service and Go Rental. Reservations are best made online before arrival.

Driving in Seattle is quite a leisurely affair, in no small part thanks to the city’s efforts to make the streets safer for pedestrians. Most city roads are split into 2 categories; Arterial (typically roads split with a yellow line) and Non-Arterial (smaller, residential style roads). Arterial roads now have a speed limit of 25 mph (40 km/h) while Non-Arterial roads are usually 20 mph (30 km/h), though there are some signposted exceptions.

If you want to drive in Seattle then you must be over 21, though in some areas this is increased to 25. You also need a full driving licence from your home country as well as an international driving permit. It’s also very important to have insurance on your vehicle and to keep proof of said insurance with you at all times. You also need to have a hazard triangle in the car at all times under state law, though that should be provided by your rental company.

While there is limited free parking in Seattle, there are a number of garages that offer parking for $7 per hour around the downtown shopping area. The good news is if you are traveling on a Sunday or during a national holiday then the normal parking restrictions are not enforced. The roads around the city are generally well maintained, making driving an enjoyable and safe experience, though you should be mindful of the cycling lanes that run alongside many roads in the city. A rental car will definitely improve your holiday, giving you easy access to all the best sites!