Compare prices on car hire in Tallahassee from all the major brands and find the best deals. When you book through us, unlimited mileage and insurance are always included in the price given. 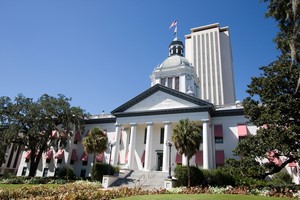 Tallahassee is the capital of the state of Florida. It is located in the state’s northwestern corner, the Pensacola (on the west coast) and Jacksonville (the east coast). The name is Indian and can be translated as “old town”, even though it was not founded until 1824. With its 171,922 inhabitants (2008) is Tallahassee a large city by American standards, although in the metropolitan area lives almost 360,000 people.

Among the sights in Tallahassee is “The Old Capitol” – the old Senate building, which in 1978 was replaced with “The New Capitol,” and is now a museum.

Otherwise, the Natural Park Wakulla Springs a popular destination. Here were some of the first Tarzan movies (with Johnny Weissmuller in the title role) was recorded. Also Pebble Hill Plantation belonging city’s attractions. It was originally a typical Southern states-cotton plantation – which now serves as a museum.

There are two regional airports in Talla Hasse, which has routes to other cities in the southern United States : Talla Hasse Regional Airport and Tallahassee Commercial Airport.