Compare prices on car hire in Ayers Rock from all the major brands and find the best deals. When you book through us, unlimited mileage and insurance are always included in the price given. 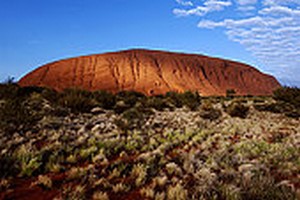 Ayers Rock is one of the most distinctive tourist attractions in Australia – a reddish sandstone mountains in the interior of the continent, specifically in the southeastern part of the Northern Territory.The mountain is believed to be about 230 million years old, and rises 330 feet above an otherwise nearly flat plains. The nearest town is Alice Springs , ca. 450 km northeast of Ayers Rock.

Inside the mountain there are several interesting caves with wall paintings made by Australia’s indigenous inhabitants, the Aborigines. They have also always called Mount Uluru – and since 2002 has been the official name Uluru / Ayers Rock. Around the mountain there is now a National Park – Uluru-Kata Tjuta National Park – Covering an area of ??the entire 1398 km2. It includes Kata Tjuta / Mount Olga – a group of distinctive, dome-shaped cut that is about. 25 km west of Ayers Rock. The whole park is a UNESCO World Heritage Site.

Close to Ayers Rock was a few years ago built a vacation center – Ayers Rock Resort – where hotels, restaurants, supermarket etc. around a beautiful, open space with swimming pool.

6 km outside the resort center, find Airport Ayers Rock Resort Airport which has daily scheduled conjunction with the cities of Perth , Sydney , Cairns and Alice Springs .