Compare prices on car hire in Villach from all the major brands and find the best deals. When you book through us, unlimited mileage and insurance are always included in the price given. 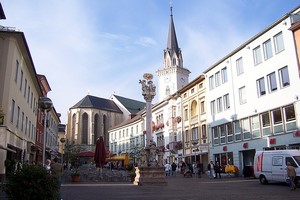 Villach is the second largest city in the state of Carinthia in Austria , and in 2007 the population was estimated at nearly 59 000The town is located south of the country, some to the east of Austria’s western arm. Villach is an important railway junction with connections to the nearby border countries Italy and Slovenia .The town was mentioned in sources as early as 878

Today there are many tourists who come to Villach, partly because of the historic town with its magnificent medieval churches, but also because the city has much more to offer. Villach offers many museums and attractions such as a dock museum, water park and spa, and zoo Affenberg Landskron. When you visit Villach should take a boat trip on the picturesque River Drau, or travel when the city hosts New Orleans Festival, the festival Summertime or when it is held carnival.

For those traveling by air, you have to book travel to Klagenfurt and its airport Klagenfurt Wörthersee International Airport.Klagenfurt is located about 40 km from Villach.