Compare prices on car hire in Weiz from all the major brands and find the best deals. When you book through us, unlimited mileage and insurance are always included in the price given. 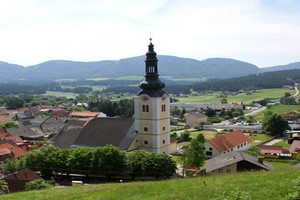 Weiz is located in the province of Styria in Austria , and in 2006 the population measured at just over 9000The city is located far east, a short distance inland, west of the border with Hungary .Because of its size, it can be difficult to look at the map, but it is to find the middle of the triangle formed between Kapfenberg, Hartberg and Austria’s second largest city Graz.

The most famous attraction in Weiz is Weizbergkirche. This is a beautiful church that is often depicted on postcards from the city. The present church replaced an old church in the 1700s, supposedly because of too little light. The old church will have been raised even before the year 1100 and have been renovated and rebuilt several times. Other beautiful sight is the church Taborkirche and various caves.

The easiest way to fly to Weiz is to land in Graz. The airport’s official name is Graz Thalerhof-Flughafen and is located about 30 km southwest of Weiz.