Compare prices on car hire in Mechelen from all the major brands and find the best deals. When you book through us, unlimited mileage and insurance are always included in the price given. 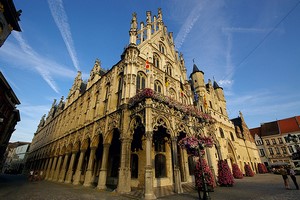 The population in the Belgian city of Mechelen in 2009 was estimated at over 81 000 within the city limits, while the figure excluding the surrounding areas were measured at almost 325 000This city is located in the province of Antwerp and is located to the north in central Belgium , near the river Dijle.This city is located about 25 km southwest of the city of Antwerp and about. 25 km northeast of the capital Brussels.

The city was founded in the early Middle Ages, and like many other Belgian cities characterized Mechelen of his old age, with its narrow streets and historic buildings. There is very little traffic through the center of town, providing an excellent base for shopping and sightseeing. Mechelen often characterized by the impressive tower St. Rumbolds. The tower was supposed to be even higher, but construction was halted in the 1500s due to lack of finances.

Mechelen has no its own airport, but most travel to Brussels International Airport located 25 km away.It runs both buses and trains to and from Mechelen all day.