Compare prices on car hire in Belo Horizonte from all the major brands and find the best deals. When you book through us, unlimited mileage and insurance are always included in the price given. 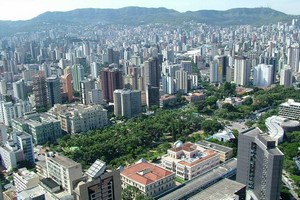 Belo Horizonte is the capital of the region of Minas Gerais and the metropolitan area is the third largest in Brazil .The population of the city in 2009 was measured at over 2.4 million, and the figure rises to almost 5.4 million when you include the surrounding areas. Belo Horizonte is located in southwestern Brazil, about 500 km from west coast and the Atlantic Ocean. Belo Horizonte was the first artificial city in Brazil and was built in the 1890s.

The city has many open spaces and parks, and the grid is square so it’s easy to find. Belo Horizonte is a lively city that is known for its vibrant nightlife and its countless bars and discos. It also held various festivities each year, including a large carnival in February and the International Short Film Festival and the International Theater Festival. Other attractions are the artificial lake of Pampulha and museums such as the Museu Histórico Abilio Barreto concerning the city’s history.