Compare prices on car hire in Manaus from all the major brands and find the best deals. When you book through us, unlimited mileage and insurance are always included in the price given. 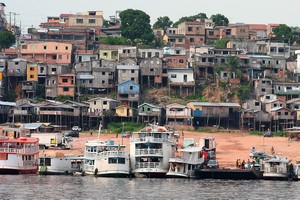 Manaus is located centrally in the northern part of Brazil .The city is situated on the banks of the Rio Negro, which runs along the Amazon River for 15 km. The city was founded in 1669 and grew towards the end of the 1800s because of the rubber plantations. Now home to about 1 700 000 inhabitants in the city (2009). Manaus is surrounded by jungle and is the only city in a radius of 1000 km.

Manaus is known because of the port and its location in the jungle and the world’s largest river. Some of the most famous tourist attractions are boat trips along the river and trips into the jungle. In the city there are many parks and green spaces, including a botanical garden and a zoo. Also, several of the beautiful buildings are worth a visit, including the famous opera house from 1896. Along the Rio Negro, many beach resorts that are popular among residents and visitors.

Eduardo Gomes International Airport is a major airport is 14 kilometers from Manaus.