Compare prices on car hire in Rio De Janeiro Airport from all the major brands and find the best deals. When you book through us, unlimited mileage and insurance are always included in the price given. 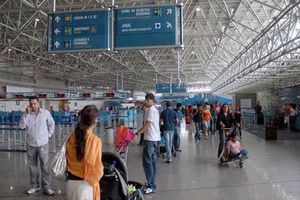 Rio de Janeiro / Galeão – Antonio Carlos Jobim International Airport (GIG) is located 20 km north of Rio de Janeiro .It is named after the Brazilian musician Antonio Carlos Jobim, but first and foremost known as Galeão International Airport. There is a shuttle bus that runs every hour from the airport and stops at major hotels. The car rental companies that are at the airport are Avis, Hertz and Localize. 11,796,413 passengers visited Rio de Janeiro Airport in 2009 which is the second largest by number of passengers in Brazil. It should now be refurbished and upgraded up to 2014 FIFA World Cup. From the airport there are direct flights to 18 different countries, primarily to other cities in South America. Rio De Janeiro Airport has a satisfying variety of restaurants, bars, cafes and shops. Other amenities include a bank, baby / family rooms, pharmacies and hospitals. There are two hotels at the airport, it is the Luxor Hotel and the Hotel Pousada.