Compare prices on car hire in Rio De Janeiro from all the major brands and find the best deals. When you book through us, unlimited mileage and insurance are always included in the price given. 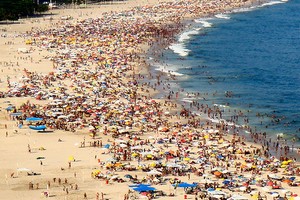 Rio de Janeiro is Brazil’s second largest city and the population of the city is located on 6.6 million (2007).Including the metropolitan region, the number measured at nearly 12 million in 2007.Rio de Janeiro is located on the coast to the south and borders the Atlantic Ocean. The city was the capital of the country until 1960, when Brazil took over the state.

Rio de Janeiro is very famous for its beautiful natural harbor and attractive beaches such as Copacabana and Ipanema. Many paying a visit to one or more of the city’s parks, and the 38-meter high statue of Christ on Corcovado mountain peak is a feature of both Rio de Janeiro and Brazil .The main tourist attraction is the carnival every year taken 40 days before Easter.

There are several airports in Rio de Janeiro, including for domestic flights and military airports. The international airport Galeão International Airport is located 20 km north of town where there are flights to Europe and USA.