Compare prices on car hire in Douala from all the major brands and find the best deals. When you book through us, unlimited mileage and insurance are always included in the price given. 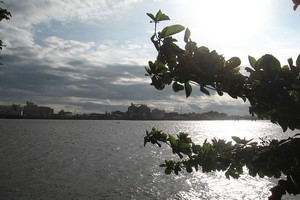 Douala is the capital of the province of Littoral located entirely west of Cameroon. Douala is the largest city with a population of about 2 000 000 (2005). The town is beautifully situated on the Cameroon coast and lies at the mouth of the river Wuori that runs through town and out into the Gulf of Guinea. Here is the country’s most important and biggest port where the exported commodities such as coffee, fruit and cocoa. Douala was under German and French control until 1946.

One of the attractions of the city’s bridge Bonaberi approx. 1800 meters and connects the neighborhoods on either side of Wuori. There are several museums to be found in the city, including the Musee de Douala, which is a historical museum with free admission. If you are interested in art should pay a visit to Cameroon Art Museum. Limbe Botanic Garden is a tropical garden with laboratories, library and museum.

Douala Airport is the busiest airport in the country and is located about 10 km outside the city.