Compare prices on car hire in Montreal from all the major brands and find the best deals. When you book through us, unlimited mileage and insurance are always included in the price given. 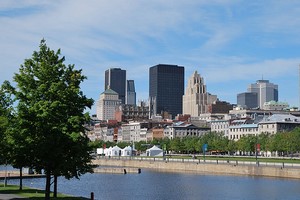 Montreal is Canada’s second largest city, and in 2006 the population measured at over 1.6 million within the city limits, while the figure in Greater Montreal was more than 3 600 000Montreal is located on Montreal Island in the province of Quebec, on the southeastern of the country. In the nearby area flowing rivers St. Lawrence River and Rivière des Prairies. Montreal is the second largest French speaking city in the world after Paris .

Montreal is a culture that offers many different attractions and festivities. The world-renowned entertainment company Cirque de Soleil is located here and the town hosts as well as several festivals. Here is the biggest comedy festival in the world place called Just for Laughs, or “just for fun” in Norwegian. The city is also rich in museums and botanical gardens, and four Roman basilicas.

Montréal-Pierre Elliott Trudeau International Airport is also known as Dorval Airport, located about 15 km outside the city.In 2008 the airport was the third largest in Canada with 12.8 million passengers.