Compare prices on car hire in Quebec from all the major brands and find the best deals. When you book through us, unlimited mileage and insurance are always included in the price given. 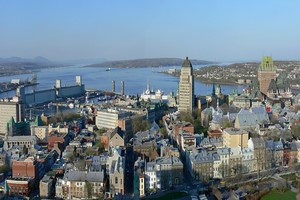 Quebec is the capital of the province of Quebec, and in 2008 the population of downtown measured at almost 530 000Quebec is located in southeastern Canada , near the mouth of the river St. Lawrence.Most of the inhabitants speak French and the city is an important port city. Quebec was founded in 1608 and is one of North America’s oldest cities. Canada is named after the settlement that was where Quebec was founded.

Many tourists visiting Quebec each year. The city has much to offer and that Canada is probably the most historic city, it is much ancient culture to experience. In the old town of Vieux Quebec, which is closest to the river, is still the city walls and moats intact. There are also many historic buildings, some of which stems from 1600 – and 1700’s. The district deadlines with museums, Latin Quarter, an aquarium and theater. Old Town is listed as a UNESCO World Heritage list.