Compare prices on car hire in Charlottetown from all the major brands and find the best deals. When you book through us, unlimited mileage and insurance are always included in the price given. 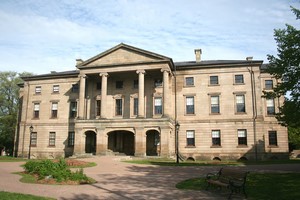 Charlottetown is a city located in the Canadian province of Prince Edward Island. The island is located south of the country, just outside of the country’s mainland, which borders on the north east part of the United States . Charlottetown is centrally located on Prince Edward Island and is the site’s main port.The city is also the capital of the island, and in 2008 the population estimated to be around 40 000

Charlottetown is a charming place that mainly live on fish, food, agriculture and tourism. It was here that Canada’s genesis occurred in the 1800s and visitors can learn more about the city and the country’s history by visiting the Founder’s Hall and the Historic Great George Street. The modern Charlottetown has a lot different to offer, both beaches, golf, theaters and a lively nightlife. Every summer, held Charlottetown Festival and the popular musical Anne of Green Gables, based on books by LM Montgomery.

Charlottetown Airport is located approx. 6 km north of the city and put up the flights within the country.