Compare prices on car hire in Kamloops from all the major brands and find the best deals. When you book through us, unlimited mileage and insurance are always included in the price given. 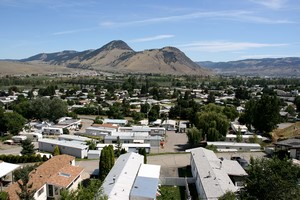 Kamloops is a Canadian town located southeast of the province of British Columbia. The province is located south of the country and borders the United States in the south.The city is located in the same area as the rivers North Thompson and South Thompson meets and becomes Thompson River. It is about 250 km to Vancouver in the southwest and it takes nearly 3 hours to drive to the border.Kamloops was founded in 1813 and its population is currently at almost 70 000 (2008).

Kamloops offers both attractions and activities throughout the year. In winter, Kamloops sought after for its winter activities like snowmobiling and sleigh rides, and Sun Peaks Resort is the third largest ski resort. Popular summer activities include horseback riding, canoeing and kayaking and fishing. All year round you can visit the BC Wildlife Park which is a mixture of a zoo and an activity center. Kamloops deadlines even with an old steam locomotive that runs eerie ghost tours around Halloween, cozy winter tours of the Christmas season.

The closest airport is Kamloops Airport is located approx. 10 km outside the city.