Compare prices on car hire in Kelowna from all the major brands and find the best deals. When you book through us, unlimited mileage and insurance are always included in the price given. 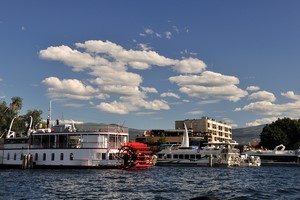 Kelowna is situated south of the province of British Columbia located in western Canada and bordering the Pacific Ocean.There are about 270 km to the city of Vancouver, and it takes approx. 1.5 hours to drive to the border. Kelowna has an attractive climate with much sun and is located in the Okanagan Valley, just off the shores of Lake Okanagan Lake. Number of residents were estimated to be over 125 000 in 2008.

Kelowna is characterized by parks and beautiful beaches and the area is known for the production of fruit and wine. In summer you can swim, fish and run water skiing on the lake, and in winter it is common to pull into the surrounding mountains and indulge in winter activities like snowmobiling and skiing. In the city there are many galleries and museums, including a historical museum and a wine museum. It is organized wine tastings and festivals such as Fat Cat Children’s Festival and the Okanagan Wine Festivals.

Kelowna International Airport is located ca.12 km outside the city and is the tenth busiest airport.