Compare prices on car hire in Mississauga from all the major brands and find the best deals. When you book through us, unlimited mileage and insurance are always included in the price given. 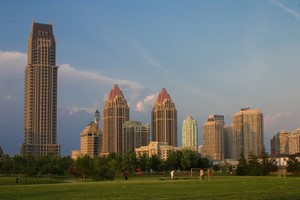 Mississauga has a port called Port Credit. This is a historic town with pleasant streets and buildings, and cozy restaurants, bars and cafes. Another historical attraction is the Benares Historic House from the early 1800’s, and its history is told at Bradley Museum. In addition, held the festivities for the whole family, as the Waterfront Festival, Bread and Honey Festival and parade Santa Claus Parade at Christmas time. Square One Shopping Centre is one of Canada’s largest shopping centers, and Playdium is a game and activity center.

Toronto Pearson International Airport is the largest airport in the country is about. 15 minutes outside of Mississauga.