Compare prices on car hire in Nicosia from all the major brands and find the best deals. When you book through us, unlimited mileage and insurance are always included in the price given. 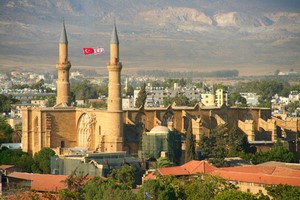 Nicosia is located in Cyprus and is the nation’s capital.With its 200,000 inhabitants is the largest city of Cyprus. In Greek city of Lefkosia. The capital is divided into a Greek and a Cypriot zone. From here the boat to the Cypriot towns of Limassol and Larnaca .

Nicosia to have occurred around 295 BC The name of Nicosia was opened in the Middle Ages. In 1192 the city was the capital of the kings of Cyprus. The old town has many authentic cafes serving Cypriot coffee. Among the sights are the Gothic Cathedral of St. Sophia from the 1200s who converted to mosque. Mustafa Pahsa believed the prophet Omer lived here when he visited the city. The city has several museums, archaeological museum, motor museum and historical museums. Every year the city hosts Cyprus International Film Festival and the tennis tournament, Davis Cup. Nicosia a vibrant nightlife.

Larnaca International Airport is located 40 kilometers outside the capital.