Compare prices on car hire in Karlovy Vary from all the major brands and find the best deals. When you book through us, unlimited mileage and insurance are always included in the price given. 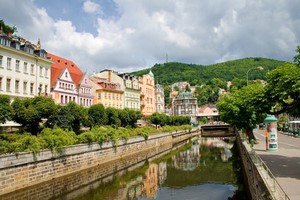 Karlovy Vary is located northwest of the Czech Republic and is located nearly 30 km south of the border with Germany .Karlovy Vary is situated at the confluence of the rivers Teplá and Oh?e, and the German city is better known as Carlsbad. The city was founded in 1370, and today the number of people estimated to be around 50 000 (2008).

Karlovy Vary is known for being a health resort with many heat sources. River Teplá is a warm river, and that there are 13 major and 300 minor sources. The most famous of these sources is Sprudel that encounter water at 72 degrees Celsius 11 meters into the air. Since the 1400’s, the sources had its healing reputation, and today there are many spas and spa across the city. Several of the spa resort set in beautiful, historic buildings from the 1800s and called Spa In, Spa II and the like.

Karlovy Vary Airport is the fifth largest airport in the country and is located about 6 km outside the city center.