Compare prices on car hire in Aalborg from all the major brands and find the best deals. When you book through us, unlimited mileage and insurance are always included in the price given. 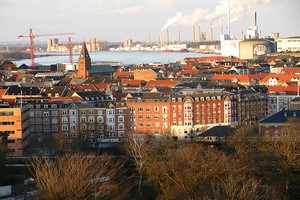 Aalborg (Ålborg), which has 123,432 inhabitants (2010), located by the Limfjord – and is the administrative center of Region North Jutland in Denmark. Throughout the municipality Aalborg, which occurred after a municipal merger in 2007, is home to nearly 200,000 people. Aalborg center located at the south bank of the Limfjord, while the smaller town of Nørre Sundby (which today is part of Aalborg), located on the north shore.

A memory from the city’s earliest history is still at Lindholm Høje (north of the Limfjord), where you can find graves from both Iron Age and Viking times. Otherwise, there are a number of historical sites in downtown Aalborg. The most famous is Aalborghus Castle (built in the 1500s), Aalborg Kloster / Helligaandsklosteret (from 1400’s) and Budolfi Church / Aalborg Cathedral (mainly built in the 1400s, but where the oldest parts are from the 1100s). Mention must also be the magnificent Jens Bang’s Stone house (built in 1624), half-timbered house Jens Olufsen Gaard (also from the 1600s) and the preserved 1,700-century environment in the small street Hjelmerstald.

Tourist attractions of recent date is 55 meters high Aalborg Tower (where the top has a wonderful view over the city) and the Utzon Center (a modern culture and science with an emphasis on the relationship between architecture, art and design). Art experiences can also get in the North Jutland Art Museum. For families with children can stop by Karolinelund Tivoliland or Aalborg Zoo is recommended.

Otherwise, Aalborg, a city with an active nightlife, where the Virgin Ane Gade historically occupies a special position.

Aalborg Airport is located on the north side of the Limfjord – 6 miles northwest of downtown.