Compare prices on car hire in Roskilde from all the major brands and find the best deals. When you book through us, unlimited mileage and insurance are always included in the price given. 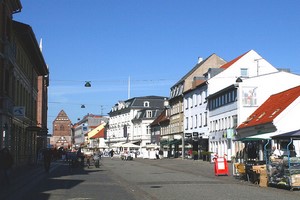 Roskilde is located in the middle of Sealand, specifically at the Roskilde Fjord in Region Sealand. Roskilde is one of Denmark’s oldest cities and has 46,300 inhabitants (2009).

The city is perhaps best known for its Roskilde Festival – which has been held annually since 1971. The festival has over 100,000 visitors every year.

One of the biggest attractions is the Roskilde Cathedral from 1170-century in Gothic style – where many Danish kings and queens are buried. The church is also listed as a UNESCO World Heritage Site. Other tourist attractions in the city: Roskilde Kloster, Viking Ships Museum   – Where the theme is maritime, ship and boat building culture from the Viking Age, and the town’s many art galleries and glass blowing factories.It is also great shopping in Roskilde, and pleasant cafes and restaurants and a bustling nightlife.