Compare prices on car hire in Odense Beldringe Airport from all the major brands and find the best deals. When you book through us, unlimited mileage and insurance are always included in the price given. 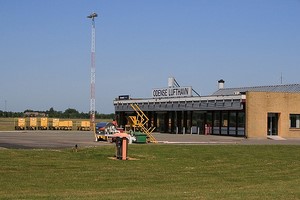 Odense Airport (ODE), also called Beldringe Airport, is a small airport located in the village Beldringe 10 km from Odense .Because of the limited departures from Odense Airport, it is common to either use the airports in the surrounding area. It takes 45 minutes to travel by train to Aarhus, and one and a half hours to Copenhagen .The easiest way to get into Odense is by taxi. It is possible to rent a car in Odense center but not at the airport. It is mainly domestic flights to Odense Airport, but the charter companies Apollo and Gislev journeys operate here.In 2006 it started a flight to northern Italy, and in 2007 to southern France .The 208 was the flight to Crete. In 2007, the runway extended to 2000 meters which means that more companies can operate. Odense Airport has few amenities, there is one restaurant at the airport.