Compare prices on car hire in Vejle from all the major brands and find the best deals. When you book through us, unlimited mileage and insurance are always included in the price given. 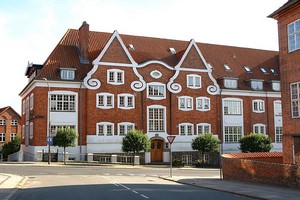 The city of Vejle has 50,650 inhabitants (2009), located southeast of Jutland in Vejle Fjord – Region South Denmark .Vejle the Municipal Court in 1327, but archaeological excavations show that the place was inhabited already in the 1100s. Vejle’s oldest building is St. Nicolaj Church from 1250-century, the city’s landmark – Vejle Windmill was built in 1847.

Today the Vejle is a modern and attractive city with beautiful scenery, rich culture and great shopping.

Some of the most popular attractions is Vejle Kunstmuseum, Økolariet – a visitor center where the theme is nature, environment and energy, Jelling-monuments – with the Viking graves and rune stone and Music Theatre – which hosts theater and concerts.Denmark’s first casino – Casino Munkebjerg – was opened in Vejle in 1990 and is still a popular attraction in the city.

Nearest airport is Billund Airport which is located 28 km west of Vejle.