Compare prices on car hire in Quito from all the major brands and find the best deals. When you book through us, unlimited mileage and insurance are always included in the price given. 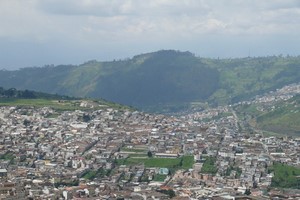 Quito is the capital of Ecuador and has a central location in the northern part of the country.The city is located in a lush valley at the foot of the volcano Pichincha. Quito is located 20 km south of the equator, but because of the height is a comfortable climate in the capital. This is the second largest city in Ecuador, and in 2008 the population measured at nearly 1 400 000 The city was founded by Spaniards in 1534, making Quito to Latin America’s oldest capital city.

Although the area has been subjected to strong earthquakes several times, there are many historical sites here. Quito was founded on the Inca ruins, and the old town is a famous attraction in the Plaza de la Independencia and the cathedral from the 1500s. In 1978 this was the first town that was listed on UNESCO’s World Heritage list. Quito boasts botanical gardens and museums in addition to the cable car going up the volcano Pichincha.