Compare prices on car hire in Alexandria from all the major brands and find the best deals. When you book through us, unlimited mileage and insurance are always included in the price given. 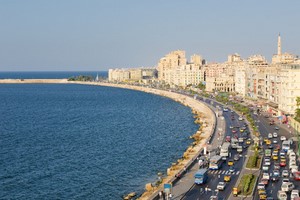 Alexandria is the second largest city in Egypt and is located in the far north. The city lies on the Nile discharge into the Mediterranean Sea and the country’s largest and most important port, which today is the western harbor. There are about 225 km to the capital Cairo in the south.Alexandria was founded by Alexander the Great in 331 BC Kr. and was one of the world’s most powerful and most beautiful cities in antiquity. In 2007, the population of almost 4 000 000.

Alexandria is a mixture of old and new, but most of the grand Alexandria lies in ruins or under water. Archaeological excavations have been done in the old eastern harbor and it is found, among other things, the sphinx and temple ruins. The remains of what one thinks is the Faro lighthouse, has been found and was one of the seven wonders. The ancient library of Alexandria was rebuilt in the early 2000’s.