Compare prices on car hire in Bradford from all the major brands and find the best deals. When you book through us, unlimited mileage and insurance are always included in the price given. 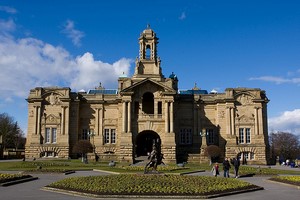 Bradford is located in the county of Yorkshire, which is the largest county in England .The city is located in the north of England, on a tributary of the Aire River. Manchester is located approximately 60 miles south of Bradford, and Leeds is located 14 km in an easterly direction.In 2009 the population of Bradford measured at just under 300 000

Bradford has for years relied on ullindustrien and this story goes back to the 1300s. The city is a cultural gem with both award-winning exhibitions and museums as well as a good number of beautiful Victorian buildings. UNESCO World Heritage Site, Saltaire is a small place close to Bradford and is a unique example of Victorian villages. National Media Museum is a well known museum based in part on television, film and radio. In Haworth is Brontë Parsonage Museum, which was home to the famous writer sisters Emily, Anne and Charlotte Brontë.

Leeds Bradford International Airport set with flights to many parts of the world and is located 12 km outside of Bradford.