Compare prices on car hire in Manchester from all the major brands and find the best deals. When you book through us, unlimited mileage and insurance are always included in the price given. 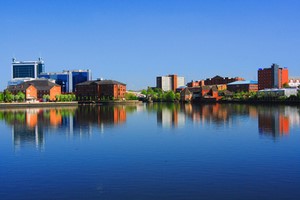 Manchester is an English city in the county of Greater Manchester. The city is located to the west coast north of the country, and it is about 60 km to Liverpool bordering the Irish Sea in the west.There is a large port in the city because of the Manchester Ship Canal which runs from the River Mersey in Liverpool. In 2008, the population within the city limits measured at almost 465 000

Manchester’s history dates back to the 1300s and the town grew because of the textile industry. Today there are many museums in town that provides an introduction to both the history and industry, including The Manchester Museum and the Cube. The city is known for hattemakeri, something you can learn more about at Stockport’s Hat Works. Just outside Manchester are attractions such as the country’s largest Aquarium Blue Planet and the Zoo Chester Zoo with over 500 different species.

Manchester Airport is the busiest airport in the country outside the London area .There are flights to many parts of the world and the airport is approx. 14 km outside the city.