Compare prices on car hire in London Stansted Airport from all the major brands and find the best deals. When you book through us, unlimited mileage and insurance are always included in the price given. 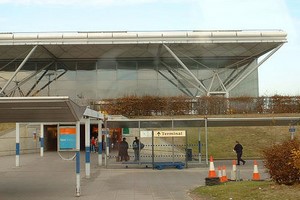 London Stansted Airport (STN) is located about 50 kilometers north-east of London .It is the third busiest airport in the UK and one of London’s five international airports. The easiest way to get in to and from London is by train which runs every 15 minutes from the airport takes 45 minutes. Five different companies offering car rental. In 2008, the airport handled 22,360,364 passengers. London Stansted is mainly used by budget airlines such as Ryanair and easyJet, and also serves as headquarters for these companies. From Stansted can fly to 160 different destinations in Europe and North Africa. The airport has a wide selection of shops, restaurants and cafes. There are two hotels at the airport. A shuttle bus runs from London Stansted to Hilton London Stansted.The new Radisson SAS hotel is located two minutes from the terminal and can be reached by a walkway with a roof.United Business Centre is located close to the airport, with meeting rooms and offices.