Compare prices on car hire in Luton from all the major brands and find the best deals. When you book through us, unlimited mileage and insurance are always included in the price given. 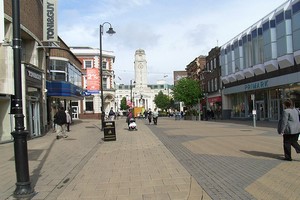 Luton is a town in the county of Bedfordshire approx. 50 km north of the capital London. The city is located in the southern part of the country, and that’s about as far from Luton to both Cambridge and Oxford in the northeast to the southwest. In 2008, the population registry to almost 194 000 Luton is an old city was probably founded as early as the 500-number.

Trade has been important for the city and it was an early market. In the 1500s, began production of bricks, while production had started in the 1600s. Today there are several museums and old buildings that are helping to show the city’s long history. Luton Museum, where among other things, the old hat production. Close to Luton is Woburn Safari Park and Whipsnade Zoo.

London Luton Airport is located 3 km outside the city center and offers both domestic and international flights. The airport belongs to both London and Luton and is the fourth largest in this area after Heathrow , Stansted and Gatwick.